Me and the old hen went to Dangriga about a month ago to help support a fellow neighbor in a court hearing, she had been wrongly incarcerated here.  She is know back home with her family in Tennesee.  But that is a different story I'll share later.

Afterwards, we stopped by a grocercy store and while Esmeralda was shopping, I was just sitting outside drinking a ice cold beer, and I saw a puppy that could only be about 8 weeks old being kicked by some idiots.  So I kicked those young men and I took the puppy away from them and brought him home so we can raise him and he will be an integral part of our home security.  He looks like a mix of rott whiler (sp?), shepherd, and mutt.  He's my new "pot licker"  in training to be a guard dog.
On the way home we carried him in a box I picked up on the side of the road that said "Cremas de Lido".  We named our cat Mr. Rum since he came home in a rum box.  Lido has a cool meaning considering where we live -- beach/water play area.  So Lido became his name.
Now my good friend/brother in Japan, Todd ,sent me my puppy's namesake song, I can't get it out of my head now.  Thanks, thanks a lot ol bro
http://www.youtube.com/watch?v=DIu0jQ5TaRQ

Well, yesterday morning I took Lido down the beach about a mile because we wanted to skinny-dip.  We went up north on the beach so we wouldn't make anyone envious.  Well, he don't care because he don't wear clothes anyway.  But my neighboors probably appreciate I go a bit up the beach before dropping drawers ahhhh ha ha ha
Back to the point though, Lido finally getting into the Sea on his own.  He came to save me when I went for a swim.  After we came out he stole my knife and took it into the bush and hid it.  I'm glad there were not any tigers to have to fight on the way home since I din't have a weapon.
Belizean guard dogs are tough.  Even though Lido is still a puppy, he has absolutely no fear of anything.  Also I should give a shout out to the Placencia Humane Society.  Volunteers and the Vet got him his shots and medicense to fix his skin.  They do good work there and help a lot of the pets in the area.  I'll post a before and after pic and you can see how well Lido looks after a lil TLC 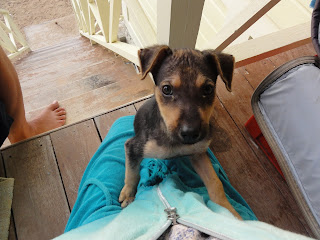 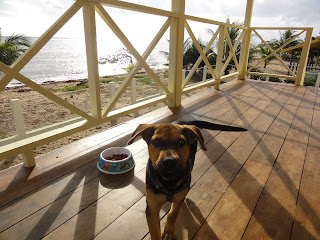 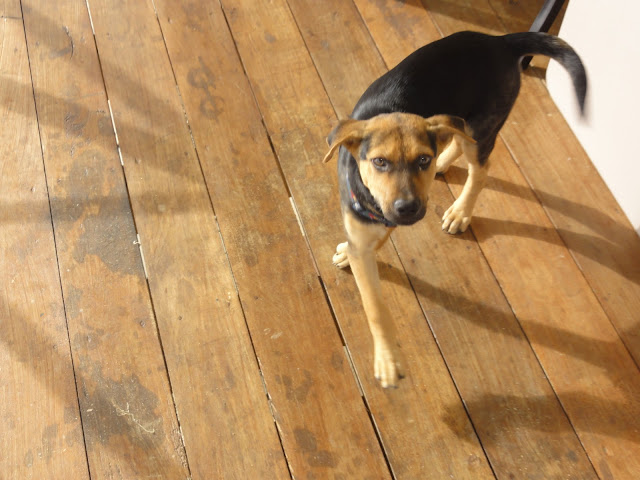 Posted by Belize Walkabout at 12:14 AM