Well friends and neighbors and rummies, winos, and teetotalers.  Welcome to my little trip report.  My old hen and I had some bidnez to take care of the capital city Belmopan, we took and extra couple of days and went to the western town of San Ignacio for a few days.  It’s near the Guatemalan border and is known as a travel/shipping point between the two countries, a smuggler’s delight, a great adventure are full of mountains, rivers, caves, Mayan Ruins and such.
It’s been a while since we were last there.  And when you live on a lil peninsula in a small fishing community as we do, ya just have to get out of town once in a while.  Walkabout the area.
I’ll give ya a lil trip report & pics on the Mayan Ruins of Xunantunich Archeological Reserve, the concert and area of the Mystic River Resort, and finally the hotel we stayed at in San Ignacio.
Let's start with Mayan Ruins of Xunantunich Archeological Reserve.

The Mayan Ruins of Xunatunich (pronounced Shun-an-tun-ich) is about 10 kilometers west of San Ignacio.  I’m not a huge fan of ruins because other than Actun Tunichil Muknal, most of them look the same to me.  Just some are bigger or in better shape.
Xunantunich, which means “the Stone Maiden” was pretty cool though.  To get there you have to cross on a hand-cranked ferry.  It’s free except for Sundays, but the dude is cranking this ferry along a cable line across the Mopan River so I had to give him a lil tip.
Then you can drive off the ferry and up to the Visitor’s Center and you have to take a small hike from there.
We explored all around, but the really coolest part is El Castillo.  It’s  40m high and you can climb all the way to the top for some spectacular views.  Here are a few pics from around the area…. 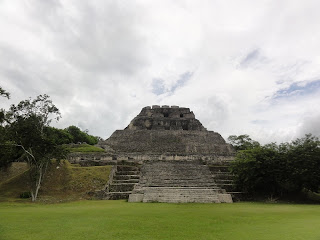 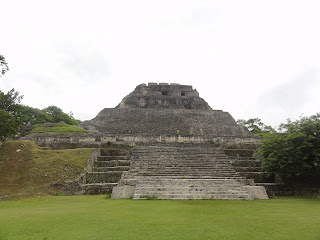 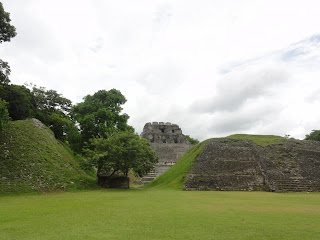 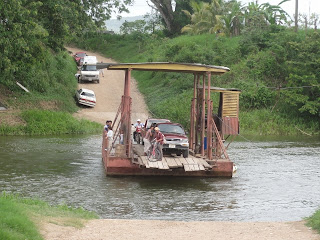 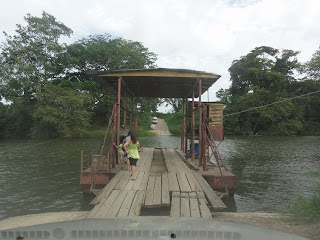 Posted by Belize Walkabout at 11:15 AM